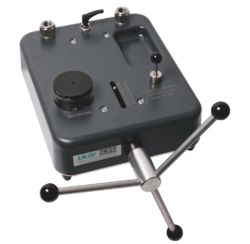 Generation of pressure up to 1200 bar

Pressure comparison test pumps are used for generating pressure for the testing, adjusting and calibrating of mechanical and electronic pressure measuring instruments by means of comparison measurements. These pressure tests can be carried out in laboratories, workshops or on site at the set measuring point.

When the device under test and a reference measuring instrument with an adequate accuracy are connected to the test pump, the same pressure will act on both measuring instruments after actuating the pump. A calibration or an adjustment can be carried out by comparing the two measured values at any pressure value.

In order to enable an accurate generation of the measuring points, the pressure comparison test pump LR-Cal LSP 1200-H is provided with a fine adjustable spindle pump.

In addition, the LR-Cal LSP 1200-H feature a spindle which only runs withing the pump body. Thus there is no adverse bending moment acting on an outstanding spindle, and particularly for field use this has the advantage that the dimension of these pressure comparison pumps will not change when the spindle is turned during operation. The LR-Cal LSP 1200-H needs only little force to generate also high pressures.

The initial comissioning is necessary only once before the first use.

You are here: Home